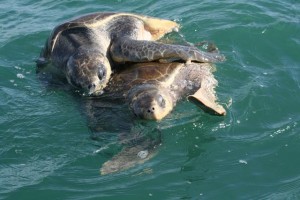 How did the olive ridley get its name?

Olive ridley sea turtles are named after the olive colored shells that many turtles of this species have.

Where do they live?

Olive ridley sea turtles live primarily in the tropical regions of the Pacific, Indian, and Atlantic Oceans. They nest on the Pacific shores of the American tropics, as well as in the Indian Ocean and along the northeast coast of South America.

How long do they live?

It is unknown how long olive ridleys live, but like other sea turtles, they are likely long-lived.

What do they eat?

Olive ridley sea turtles eat crabs, shrimp, rock lobsters, and jellyfish. These make up their main diet in the western Atlantic and eastern Pacific Oceans. There are data indicating that olive ridleys in other parts of the world eat mainly algae.

Arribada is the Spanish word for arrival. It is used to describe the mass nesting of olive ridley sea turtles. Nesting in large groups may be a defense against predators or a result of environmental factors influencing nesting. With many turtles coming ashore together and many nests subsequently hatching at the same time, it may help them to reduce predation. However, an arribada also makes the species susceptible to massive harvests by men, or natural disasters that could kill thousands of sea turtles at one time. Scientists do not know exactly what conditions bring all the sea turtles ashore to nest. Possibilities include moon or tide phases, and climate or weather conditions.

When and where do females lay their eggs? 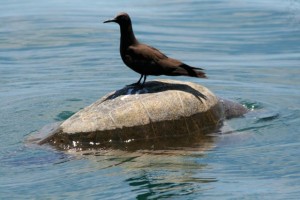 There are several important arribada beaches along the Pacific coast of Mexico and Central America, and especially in Costa Rica. There are also important sites in the Indian Ocean and in the South Atlantic Ocean. Females clear the sand with their front flippers, dig an egg chamber with their rear flippers, lay 100-110 eggs, and then use their front flippers to cover the entire area with sand. The eggs incubate for approximately 55 days before they hatch.

Who are their predators?

Hatchlings are much more susceptible to predators than adults. Crabs and raccoons feed on the hatchlings when they first emerge from their nests and fish and seabirds are a threat to hatchlings in the water. Very few hatchlings will survive to adulthood. Sharks are the principal predators of adult sea turtles, and their long flippers are especially vulnerable. Man is also a predator of the olive ridley turtle.

How many are there?

Prior to the time when sea turtles were hunted for their meat, eggs and leather, it is estimated that there may have been as many as 10,000,000 olive ridleys in the Pacific Ocean. Today the population is greatly reduced from historical times.

Why are they in trouble?

Humans have heavily exploited olive ridley sea turtles. They are killed for their meat and leather, and their eggs are collected off the beaches before they even hatch. The historic olive ridley fishery in Mexico was the largest turtle fishery in the world, with turtle products sold to Japan for high prices. Olive ridley sea turtles are often caught in shrimp trawls, longlines, and gill nets and drown because they cannot make it back up to the surface to breathe. Other problems include pollution and the loss of their nesting habitat as beaches become more developed. In the Eastern Tropical Pacific olive ridleys have been observed entangled in the debris that accumu- lates in weed lines. Sea turtles can also confuse trash and debris for food, and this can cause injury or even death. One surprising threat to sea turtles is the balloons that people let go. These balloons often float over the ocean before popping, and sea turtles can choke on the pieces of the balloon that fall into the water.

What can you do to help sea turtles?

It is possible for anyone to help support sea turtle conservation. You can help participate in beach cleanups or attend a public sea turtle walk. You can do a presentation on turtles for a class to raise awareness, adopt a turtle, or follow a sea turtle telemetry project. You can help just by remembering not to release balloons or throw trash into the ocean. You can help spread the word to your family and friends that sea turtles are an important part of our environment and should be protected.