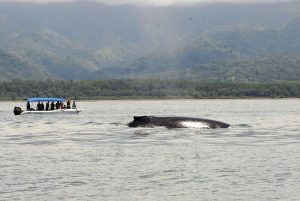 In Costa Rica there are two seasons to spot the humpback whales. They migrate from their feeding areas in the North and South Americas to our warm tropical waters for mating. These whales are characterized as being very sociable, but usually travel alone or with their offspring. They are rarely found in groups, which are mostly formed by males, to compete for the females. One of the strategies the whales use during their breeding season is to stay in warm shallow waters, such as bays, because their geographic features provide better protection for their young, known as a calves.

In Costa Rica we have the great Coronado Bay located in the South Pacific. This bay includes the waters of the Marino Ballena National Park, Drake Bay and Cano Island. The temperature and depth of the water around Cano Island provide some of the best conditions for reproduction and protection of the calves in their first weeks of life. This is also the area where the majority of migrating whales give birth to their young, giving it an important biological value. The conditions of the Coronado Bay area favor ecotourism, making it the largest in the tourism industry for the sighting of cetaceans in Costa Rica, especially for humpback whales. Three species of dolphins are seen regularly, along with the occasional visit from Bryde’s whales, pilot whales and false killer whales.

The migration of the humpbacks whales to Costa Rica occur at two different times:

Mid July to the end of October

This is known as the “rainy season” when we are visited by the southern humpback whales who migrate from the Patagonia in South America, to the warm waters of the South Pacific off the coast of Costa Rica. Their mission here is mainly to give birth to their calves, known as ballenatos, and some like it for courtship. The warm waters of the bay offer many benefits for the growth of the young as well as protection against its main predators, orca whales and some sharks. The population in this area of the south is quite large in quantity, making sightings more plentiful during the whale tours.The first sightings occur usually during the second and third week of July  being August and September the peak months for sightings where the probabilities exceed 70%.

End of December to the end of February

This time is referred to as our dry season and begins with the visit of the humpback whales of the Northern Hemisphere. They begin arriving in late December during a migration from Oregon, with the same purpose of reproduction and courtship. The population of these whales is much smaller, therefore reducing the percentage of sightings compared to the other species.

As a way of showing how important the cetaceans and other inhabitants of this bay area are to the economy here, Bahia Ballena has declared the month of September as the month of the whales in Costa Rica. During this time there is a celebration called Festival of Whales, which invites the locals to learn about whales in order to generate greater awareness in the conservation of these species. During the festival, tours are given at a reduced cost for locals and activities are provided that give information about our marine and terrestrial resources. ( The festival will be celebrated again in 2022)
.
Bahia Ballena was a fishing village in the 70’s, 80’s and part of the 90’s. At the end of the 90’s the fishermen decided to start offering boat rides to beach goers showing them the island and the coastline while observing dolphins and whales. In the beginning of 2000, the Costa Rican government began supporting the locals who were offering those tours by providing the necessary training to do the excursions in a responsible way, training the captains and guides to make the tours more formal.

Today, the tourism industry in Costa Rica is very professional, using bilingual guides and captains who are certified by the Costa Rican Chamber of Tourism, as well as being organized as associations. There are about 10 well organized whale watching companies in Bahia Ballena that even offer other activities.

Whales and dolphins, like other living beings, are susceptible to the impact of man on their environment. The application of friendly practices in the operation of tours is of great importance for their protection.

Currently, Bahia Aventuras has a protocol for sightings, making the least possible impact on the cetaceans. This protocol includes maintaining a suitable distance from the dolphins, while navigating at the same speed and in the same direction as them. In Costa Rica, swimming is not allowed near the cetaceans as not to intervene in their habitat or their behavior. The use of experienced captains and guides is extremely important. They must know whether or not the whales or dolphins feel threatened in the presence of boats by observing and evaluating their behavior. It is up to the captain to determine if the sightings should be continued or abandoned, by respecting the space of these beings. When you choose any of our tours, you will be safe and well informed!