You are here: Home / About Us / Client Testimonials

” Door to Door Service. Great guide . Saw a whale and snorkeled by caves ” 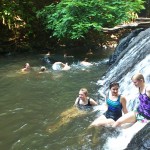 “I have been on 2 tours now to Corcovado National Park with Bahia Aventuras. Its is 60km away from Bahia Ballena so 1-1.5 hours away by boat depending on the sea tide and swell conditions. On the first tour (during the dry season in April) we saw many different animals ranging from Kowaki’s, spider monkeys, howler monkeys, scarlet macaws, sloths, snakes and Jesus Christ lizards. The patrons on the tour were bird-watchers so our tour guide Reymer specialized the tour to focus on the scarlet macaws that live along the beaches of the national park. After a 5km hike along trails through the natural jungle, we returned to the ranger’s station for lunch. The guides had a delicious lunch waiting for us with local chicken and rice with beans or salad and sandwiches served with fresh fruit. The afternoon was spent around the beach swimming or exploring the nearby trails for more of the local wildlife.

On my second tour to Corcovado (during the wet season in May), we saw less animals due to the recent storms but learnt a lot more about the national park and land history from our guide Michael. There were some new species I hadn’t seen last time such as the Igougi, a chameleon and white isis. Different conditions with the tide meant we didn’t hike along the beach but instead went further along the trails running through the jungle. Michael explained the indigenous people’s history of using this area and pointed out 400 year old pottery that remains of their lifestyles. Again we were served a delicious lunch at the ranger’s station before leaving early afternoon due to a storm coming in off the coast to arrive back to Bahia Aventuras HQ y 3:30pm. Both of my tours to Corcovado have been amazing and each one is unique in terms of the animals and plants that you see and learn about.”

“I have also been twice on the Cano Island and snorkeling tour with Bahia Aventuras. On the first tour after 1.5 hours on the boat 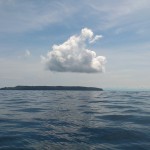 we arrived at Caño and got our snorkeling mask and fins on for the morning. The water was so clear and the reefs quite shallow – amazing fish swimming around from huge schools of Big Eyed Jacks to Angelfish and Pufferfish! After snorkeling for the morning we went to a second island – Violin Island for lunch and swimming at the beach. Again, the guides put on a delicious lunch combining both local cuisine and salad/sandwiches for those with a more Western preference. The beach on this island was so calm with almost no waves…. We could just walk out and swim in the water – beautiful to float and look up at the clouds! At 3pm we arrived home safely after an awesome tour. Many thanks to Bahia Aventuras particularly Rafa, Reymer and Michael for making the day so special!”

On my second tour despite some bad, raining weather we managed to see a group of spotted dolphins, a Green Sea Turtle and Byrde whale along the way! This was my first time seeing a whale and our guide Reymer did an excellent job of explaining its lifestyle and why it comes here to Bahia – it was such a beautiful creature to watch breaching right next to our boat! The tour group was smaller this time and everyone wanted to go snorkeling so we stayed at Cano island for the whole tour. In the morning we snorkeled twice on the left side of the island – beautiful coral reefs and lots of fish. We were lucky enough to snorkel with a Black Sea Turtle and Manta Rays as well! We stopped at 11:30 for an early lunch. We had to eat lunch on the boat because the Cano Island Biological Reserve does not allow food to be brought onto the island. After another delicious feast, we went onto the beach and had 30mins to relax and rest before more snorkeling this afternoon! During our second snorkeling session we rain into two Hawksbill turtles swimming along the reefs and two white-tipped sharks! Due to it being the wet season here in Costa Rica we left early at 1pm and arrived back in Bahia Ballens before the rains at 2pm (a very speedy trip home)! This tour was by far the best I have been on with Bahia Aventuras because the natural marine wildlife really put on a show for us today! I will never forget the experience of swimming with turtles, rays and sharks I had on this tour.

“I went on the snorkeling day trip followed by lunch and a hike in Corcovado. From start to finish, the experience was top notch. We saw Brydes whales and several dolphins on the way out to Caño island. Once we got there, I was astounded at the clear turquoise water and the beautiful scenery. Snorkeling was perfect, they provided us with fins and masks and the variety of fish was fantastic. We even saw sea turtles! After snorkeling, we headed to Corcovado for lunch and a hike. Almost immediately we saw monkeys, and even a blue morpho butterfly. Lunch was a spread of sandwiches, salads, chips, fruits, and of course some rice and beans, as well as other things – they had something for everyone as well as drinks. (They also had cold bottled water throughout the day whenever anyone needed it.)
The main guide, Ray, seemed incredibly knowledgable of the local flora and fauna as he seemed to know where all the animals were. He also explained the types of trees and told us everything to look out for. The boat captain, Jose, I think, did a great job piloting the boat through the waves and getting us everywhere safely. He even turned around to retrieve my hat when it flew off! If you are looking to see nature at it’s finest with a crew who really cares about whether or not you are enjoying yourself, then this is the crew for you. I would go back in a minute! Thank you guys, I had the best day ever!!!”

Christina
Las Vegas, Nevada, May 08th,2014
“We did the Corcovado tour with Bahia Aventuras and we thoroughly enjoyed it. Early morning we were welcomed with coffee and biscuits and then went to the boat for a one-and-half hour boat ride from Uvita to Corcovado. We enjoyed the boat ride very much, as it was wonderful to see the coastline from the sea, to feel the wind and most of all to see lots of Dolphins around the boat and even a whale-mum with her baby! So already before we arrived at Cocovado, our trip was a success. At Corcovado we did two guided walks. We walked with quite a high speed, but this was good, because this we saw a lot and especially lots of animals, amongst which: macaws, monkeys, coaties, ant eater, crocodile, bats, etc. As this ranger station of Corcovado is the most visited station and so there were some more groups of tourists, we did not feel like “being in the middle of nowhere”, but still we saw many animals. And once we were walking the trails, it was only our group. In between the two walks, we had lunch on the beach, which was included in the tour. The lunch was great, also for me as a vegetarian. Bahia Aventuras also provided plenty of drinking water and other drinks. The guides were great, they worked with a smile and provided lots of interesting information about nature. Even when we walked from the boat back to the office, the guide still showed us animals and told us interesting things. Although the guys work with a smile and make lots of jokes, it was Obvious that they take their job seriously and that safety (also on board of the boat) is a high priority. All together: a great trip and worth the money paid.”
Prinnies
Loosdrecht, Netherlands
April 24th,2014

“I am hereby providing a customer testimonial for a wonderful snorkelling tour led by Wayner Vasquez at the Ballena National Park. My wife and I thoroughly enjoyed this tour and appreciated all the fish Wayner pointed out to us and the great underwater pictures he took with our camera. In addition to the snorkelling, he showed us the sea caves of the Ballena National Park which was a nice unexpected extra. I highly recommend Bahia Aventuras to anyone visiting Costa Rica.” – Yehuda Montrose January 11, 2012

“Had a wonderful time on the Whale & Dolphin tour with my family, thanks Bahia Aventuras!” – Kathy Harper January 19, 2012

“We had a great time at Bahia Aventuras. We did the snorkeling and whale watching  tour and had a wonderful time. The best part was coming upon mating sea turtles in the middle of the ocean! The scenery is just beautiful there!” – Kristal Griffith 2010

“I had a great time with my family. My husband and I saw a shark while snorkeling and talk about it to everyone. When will you ever get a chance to do something like that again? Unless you take awesome trips all the time. The crew are very friendly and know exactly what they are doing and all you have to do is listen.”

“I went on a boat trip in Bahia Balena. It was an out of planet experience. Among the most memorable moments was encountering a large pack of Dolphins, traversing a cove in low tide. The Captain was extremely competent. The tour was choreographed immaculately. The trip included observing the whales from a safe distance and stopping off for lunch on an island and snorkeling. This trip was the highlight of my stay at Costa Rica. It is beautiful and led by extremely courteous staff at Bahia Aventuras.” – Dinesh 2010

“Being with Walter, Travis and crew is always a pleasure. We bring groups to Costa Rica several times per year and taking a trip with Bahia Aventuras is always a highlight for us. We appreciate the service, the friendliness the safety standards and the integrity of this organization. Great adventures with caring knowledgeable guides in a splendid setting.” – Franco – Global Journeys

“We wanted to say thank you for taking such good care of us in Uvita, and let you know that we look forward to coming back soon. People like you make Costa Rica the wonderful place that it is, and we love you for it! We can’t wait to come back! Love and light,” -David and Kelly McQuaid -Dallas, TX

“Every activity we participated in was glorious. This included the Combo, Corcovado, and Cano Island tours by those fantastic young men from Bahia Adventures-Rafa, Reimer, and Pina.” – Doris

“We went on a trip last year with Bahia Adventures. It was fantastic. The snacks were healthy and the staff was informed , friendly and fun! We will go with them again!” – Marta Macbeth.

“Nice overall approach and experience.  Enjoyed following the birds and schools of fish.  Great lunch.  Very helpful guides.  When we are back in Costa Rica, we would love to come again!.”  – The Carrey’s 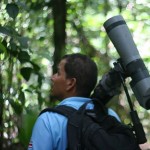 “Everything was great!” – Megan Montgomery

“I had a great trip and the tour guides were very informative and nice.” – James S. Harper

“Outstanding, we will be back.” – M. Sellars

“Loved all parts of our trip.  Rafael knew about birds, fish & the history of the land. Very good!” – Carla Arellano

“Everyone was very friendly. We had a great time. Thank you”. – Kent Delmar

“I had a wonderful time! The guide and captain were great!” – Ellen

“Wonderful guide, a tour we definitely recommend to others! Rafael made our trip both fun and educational. Was extremely flexible with us and our young children. Thank you.” – Anonymous

“Captain of the boat was real excellence.” – Anonymous