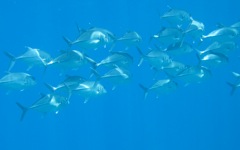 Costa Rica is a small country that represents only .03% of total world land mass yet contains 5% of the worlds biodiversity.  It is a country that has more than 25% of it’s national territory under some form of protection yet the waters that border the country have been largely neglected with less than one percent being regulated under some form of protective category.
The marine ecosystems of the Osa Peninsula have been effected by this lack of protection and are critically threatened by a number of factors; overfishing, unplanned coastal development, population increase, coastal and marine pollution, severe lack of conservation awareness, viable economic activities, etc.
However, over the last two years the conversation about marine conservation has increased and government and non-government organizations are now talking in the same language.  This conversation is also happening in coastal communities that depend on the ocean for their livelihoods. New programs and small businesses focused on sustainable marine tourism, which in the past were scarce, are now becoming the norm.
Donations from aid agencies to help Costa Rica protect its Pacific waters have been made and Costa Rica Universities are working with government organizations on monitoring studies and marine ecosystem analysis.  Costa Rica pioneered the modern eco-tourism sector by taking smart steps in land conservation and now they have the opportunity to do the same with their oceans.  Once Costa Rica combines the land-sea conservation model they could very well become the world leader in conservation.