You are here: Home / Archives for trippb

The sea was “boiling” in front of our boat.

Well, not boiling, actually, but “roiling” in silvery flashes as thousands of sardines broke the surface — only to be gulped down by brown-footed boobies bombing them from above.

“Why do they come to the top where the birds can catch them?” one of my ship-mates asked.

“Because big fish are attacking them from below,” replied Wayner, our Bahia Aventuras guide, who smiled grimly at this wildlife experience, the struggle for food and survival, a matter of life and death in the natural world.

This particular venue was a marine one, as we were sailing in Marino Ballena National Park, which encompasses 13,300 acres of ocean and only 270 acres of land on the central Pacific coast of Costa Rica. Bahia Aventuras leads expeditions in and near the park — including hiking in the biologically intense Corcovado National Park and snorkeling amid the coral reefs encircling Cano Island, with its 200-foot sea cliffs and native burial grounds lying roughly 35 miles offshore.

Early May is between whale seasons, but Wayner and our sharp-eyed skipper, Piña, pointed out other wildlife: an Olive Ridley turtle swimming along the seam where seawater met brackish water flowing forth from the Terraba-Sierpa mangrove swamp. A booby resting its webbed-feet on the roots of a floating mangrove tree. Frigate birds playfully circling and soaring over Whale Island. Pelicans bobbing along waves crashing up against sea stacks. And on a beach, white-faced capuchins hopping from branch to branch searching for fruit in almond and palm trees.

Speaking of fruit, Wayner reached into a cooler and removed tasty treats of sandia (watermelon) and piña (pineapple). And speaking of Piña, our captain ably guided our craft ever closer to steep basaltic cliffs rising above the water’s edge, revealing a few of the 200 tunnels and sea caves found around Playa Ventanas. Nimbly navigating among the rocks that appeared and disappeared under crashing surf, Piña slowed the craft, then sped it up suddenly, surging into one of the tunnels. Inside the tunnel another cave appeared to our right, and we marveled at the beauty of the ocean’s work. We cruised forward again and emerged into sunlight on the other side of the cave, big smiles on every face.

Wayner pointed out the whale’s tail, a distinctive tombolo of sand and rock that is the key geologic feature of the park. Alcoa Company tried to build a dock of aluminum on the tail, spurring angry protests from locals that resulted in the creation of the park in 1969. A good thing, I reflect, given the numerous but fragile marine life resources there.

Life like the 6-foot long black and yellow striped moray eel we saw while snorkeling above the reef near Whale Rock. Our heads full of memories, we returned to Playa Uvita in the early afternoon after a day of adventure on the sea. 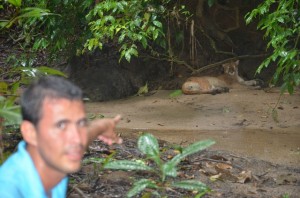 Suitable for children over 3 years of age – Not recommended for infants.